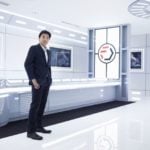 A Digital Hero with a Difference1 min read

A Digital Hero with a Difference1 min read

Dato’ Seri Ivan Teh, the Founder & Group CEO of Fusionex reminds us that not all heroes wear capes where art and science collide.

Dato’ Seri Ivan Teh stands on one of the three floors that Fusionex’s 60,000 sq ft R&D facility occupies at Plaza 33 in Petaling Jaya, putting on a demonstration of his company’s voice recognition software: “And… lights!” He snaps his fingers, and the elongated ceiling lights dim. One more snap, and the lights beam at full brightness upon his command. Another click of his fingers closer to a room featuring a life-size R2-D2 model (which lets out the occasional excited bleep), and a glass window – previously opaque – turns transparent.

It makes for an impressive, entertaining display of the sort of technological wizardry that Fusionex is capable of achieving but, really, it’s just the tip of a very substantial iceberg. From the time it was founded in 2005, Fusionex has made a name for itself in the global technology industry by specialising in analytics, big data, machine learning, artificial intelligence and, perhaps most importantly, its ability to make sense of vast amounts of structured and unstructured data for its clients. With an official net worth that currently stands at MYR1.2 billion, this is a company that – as Dato’ Teh explains – began with a badminton game and a dream of becoming a superhero.